madrona point and a sea lion 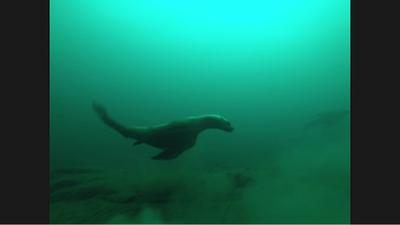 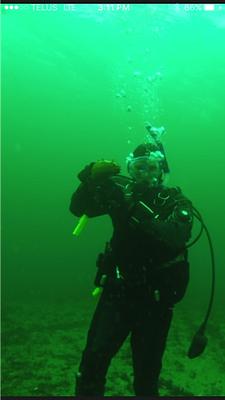 my cousin and i dove madrona wall jan.16 of 2016, we noticed 3 sea lions right away but they kept their distance. after diving the wall, which was a really fun dive with the flashlights, looking for animals, lots of fish, a field of sea cucumbers, moon snails and large scallops. We were finished our first tanks , coming back thru the maze, a grouping of rocks, and onto the second dive. We were about 60' down, i looked out to the west and saw a single california sea lion come up to us. He began to circle between us doing figure 8's , and we were about 6' apart. He swam with us for about 30 seconds, swam away and back three times in total. On his last visit my cousin and i were about 12' apart and he had his head down watching something in the sand when then the sea lion snuck up behind him and gave him a bite at the back of his leg, by his butt. My cousin just looked behind to find this sea lion about 1' from his mask....blub, blub, blub, the bubbles shot out of his reg, he was a little startled to say the least. Once i saw he was o.k. i almost peed my drysuit laughing. he said he thought it was me trying to get his attention grabbing his leg. It was one of my best dives for sure, lots of life, easy shore dive, vis was 40', and not busy. We had the gopro down for the first but left it for the second so missed the sea lions. Looking forward to the next dive. Maybe the saskatchewan.